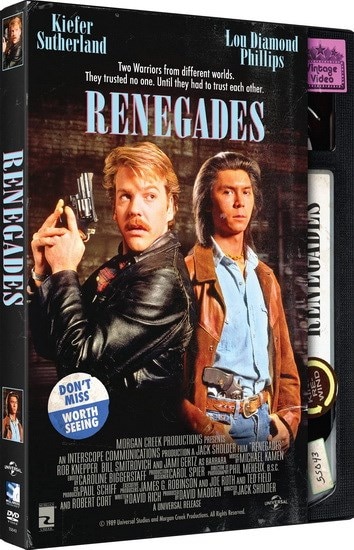 Kiefer Sutherland and Lou Diamond Phillips star in this modern-day action-adventure as mavericks who join forces to bust the city’s biggest crime ring. Unconventional undercover cop Buster McHenry (Sutherland) infiltrates a gang of criminals by joining in a jewelry heist. The attempt fails, but the gang manages to steal a rare weapon from a nearby American Indian exhibit. Deserted by the gang and now hunted by the police, McHenry reluctantly joins forces with Hank Storm (Phillips), and Indian who’s come to the city to recover the sacred lance. Their whirlwind trail propels the team through a wild car chase, a harrowing rooftop gunfight and a perilous chase on top of a subway car. It’s a fast-paced action that leads to a fiery climax in this exciting climax in this exciting film from director Jack Sholder (The Hidden).