HomeCategoryMusic and MoviesMovies and TV SeriesCloak and Dagger (4K + Blu-ray) 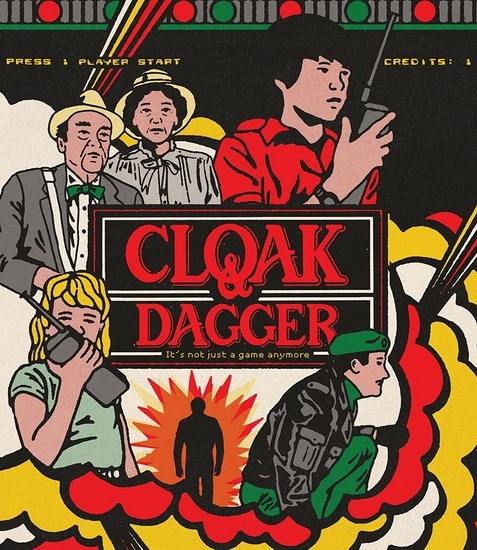 Davey Osborne is an average 11-year-old boy with an overactive imagination. He spends his days playing video games and pretending to be a spy with his imaginary father-figure, Jack Flack - a substitute for his real father, who is struggling with the recent death of Davey's mother. However, fantasy becomes reality for Davey after he witnesses the murder of an FBI agent, who in his dying breath, gives Davey a mysterious video game cartridge called Cloak & Dagger, which in actuality contains top-secret government information. With the help of his younger friend Kim, the tech savvy Morris, and even a little help from his fictional secret agent mentor, Davey must stay one step ahead of pursuers as he tries to survive a real-life game of espionage in the streets of San Antonio, Texas. A nostalgia laden cult favorite from director Richard Franklin (Patrick, Psycho 2) and writer Tom Holland (Fright Night, Child's Play), CLOAK & DAGGER was one of the key, trend-setting films to place young characters in high-stakes action sequences, featuring incredible stunt work, the likes of which would never be pulled off today. With a stellar starring turn from Henry Thomas (E.T. the Extra-Terrestrial, Suicide Kings) and featuring strong supporting performances from Dabney Coleman (War Games, The Beverly Hillbillies), Christina Nigra (Twilight Zone: The Movie), and William Forsythe (The Devil's Rejects), Vinegar Syndrome Ultra is proud to present CLOAK & DAGGER for the first time on 4K Ultra HD fully restored from its 35mm original camera negative.