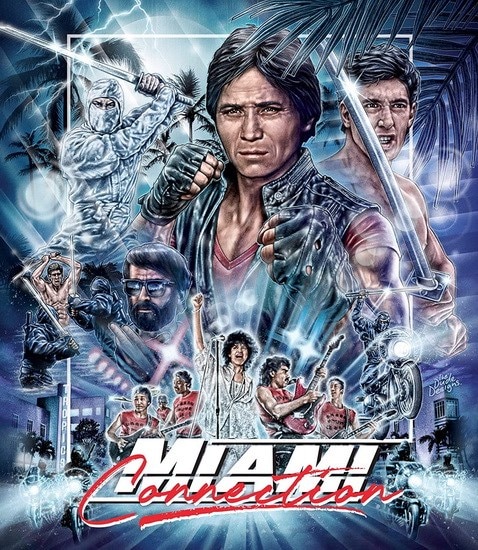 Dragon Sound, the house band at Orlando's #1 nightclub is made up of five orphans and university classmates, all of whom are experts in Taekwondo, with a musical mission to share the importance of love and friendship. Lead singer John is engaged in a budding romance with Jane, sister of Jeff, a kingpin in one of Florida's toughest drug pushing gangs. A resentful rival band enlists the help of Jeff and his crew of violent, motorcycle riding thugs to exact vengeance for their bruised egos, against Dragon Sound. The five best friends are soon forced to put their fighting skills to the ultimate test, not just to defend themselves, but their entire community from the iron grip held over it by these narcotics trafficking hooligans. An international cult sensation and tribute to the unwavering power of friendship, Woo-sang Park (aka Richard Park) and Y.K. Kim's MIAMI CONNECTION was the cinematic passion project of Florida based martial arts teacher, Grandmaster Kim, and combines explosive action set pieces, daring and elaborate fight sequences, and live musical performances from Dragon Sound. Featuring a cast comprised of Kim's students along with plentiful local talent, MIAMI CONNECTION offers the best traits of regional exploitation filmmaking through the aesthetic of Cannon-esque 80s action, and finally comes to UHD from Vinegar Syndrome, exclusively restored in 4K from recently unearthed negative materials and loaded with plentiful archival and newly shot extras. Plus, this edition includes the world home video debut of its long lost pre-release version, ESCAPE FROM MIAMI, which features numerous additional and extended scenes as well as a completely different ending!