HomeCategoryMusic and MoviesMovies and TV SeriesRollerbabies & Mount of Venus (Blu-ray) 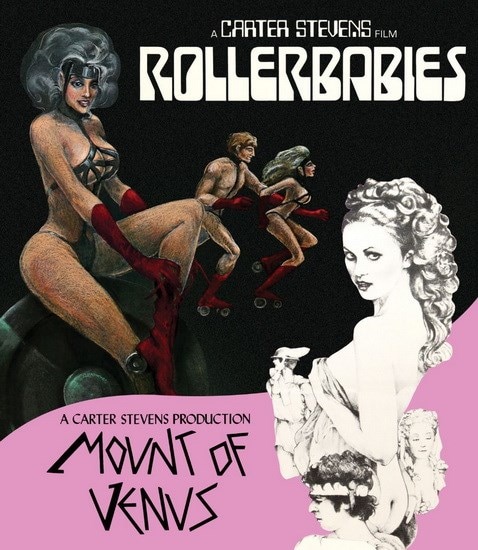 Prolific New York based director Carter Stevens made his name by helming fun-filled sex romps with all-star casts. Presented here are two of his early critical and audience successes.

In the future, sex will be illegal…but there will be ROLLERBABIES! In a dystopian world where sex has been deemed a punishable offense to reduce the population, the only form of carnal release can be experienced through explicit action on TV. With an over saturation of hardcore programming, Sherman Frobish’s network is taking a dive…until he devises an ingenious plan to regain viewership: Rollberbabies! Carter Stevens’ loving tribute to sci-fi pulp and comic books is a light and breezy comedy and stars Terri Hall (Story of Joanna).

The Greek God Jupiter cannot understand why humans no longer worship his strength and virility. In an attempt to ‘prove’ his worthiness for praise, he travels to earth on a mission to seduce as many young women as he can, hoping to earn their devotion in the process. All the while, Jupiter’s fellow gods and goddesses form a literal Greek chorus, tracking and assessing his carnal pursuits. Sublimely goofy and starring Georgina Spelvin, Jamie Gillis, Kim Pope, and Eric Edwards, MOUNT OF VENUS is equal parts laughs and explicit action.