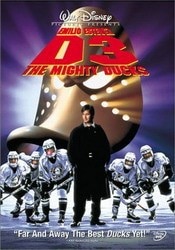 Your package will leave our warehouse within 3 to 5 days, excluding weekends and legal holidays. The delivery date will depend upon delivery by post, according to the destination distance. Deliveries within Quebec usually take from one to three days. for Click here more details on delivery delays.

In this third installment of the "Mighty Ducks" series, the misfit hockey playing kids are now teens, attending a tony private school on scholarships. However, they have a new coach, as Gordon Bombay has left his post to work for the Goodwill Games. But Bombay, a lawyer, decides to represent his old team when they start losing and the school threatens to throw them out. The teens face another uphill battle when they must play an older, more ruthless team, who are looking to cook the Ducks. Will the school force the team to fly the coop? And can these gutsy young athletes defy the odds and defeat their foes?